The topic of today’s post is an inspirational quote that is often misattributed and sometimes misworded.  Follow along as it twists and turns it way around five different people.

The Misattributed Quote and Its Variations

✘ “The problems of the world cannot possibly be solved by skeptics or cynics whose horizons are limited by the obvious realities.  We need men who can dream of things that never were.”
John Keats

✘ “The problems of the world cannot possibly be solved by skeptics or cynics whose horizons are limited by the obvious realities.  We need men who can dream of things that never were and ask, why not.”
Spencer W. Kimball

✓ “The problems of the world cannot possibly be solved by skeptics or cynics, whose horizons are limited by the obvious realities.  We need men who can dream of things that never were, and ask why not.”
John F. Kennedy
Speech to the Irish Parliament
Dublin, Ireland
June 28, 1963

Note:  The second sentence of the quote is actually the root of another misquote where George Bernard Shaw morphs into two different Kennedys.  I will discuss that saga below in Part II.

Here is the excerpt from the transcript of John F. Kennedy’s speech:

The Quote Found in the Transcript of John F. Kennedy’s Speech to the Irish Parliament on June 28, 1963

Both the transcript and the audio recording of this speech can be found on the John F. Kennedy Presidential Library and Museum website (jfklibrary.org).

The quote can be heard 17 minutes and 19 seconds into the audio recording.

The quote virus is working overtime on this one.  I surveyed 73 websites featuring this misquote, and gathered the following statistics:

The Sources of the Misattribution

As usual, it is the websites dedicated solely to quotes combined with websites presenting quotes as a major feature that make up the largest percentage.  I know I sound like a broken record, but I must reiterate:  never trust a quote that is not from a reliable source.  Just because a website specializes in quotes does not mean it is reliable.  Be extra cautious if the website allows random visitors to add quotes to its collection; these sites are the most notorious for inaccurate quotes.  Make sure detailed source information accompanies the quote.  The name attribution alone is not sufficient.  The information should provide enough detail to enable the reader to easily look it up.

As usual, I found books containing the misquote as well.  There are at least four, and all were published in the recent 2000s.  One is a quotes collection book.  And much like websites, just because a book specializes in quotes does not mean it is reliable.  Before purchasing a quote book, make sure detailed source information is provided for each quote.

Why I Call It a Quote Virus

To illustrate why I call this phenomenon a quote virus, I randomly picked three of the blogs that displayed reblog statistics and counted them.  The first one had 44 reblogs; the second one had 693, and the third one had 730 reblogs.  This is a perfect demonstration of how the quote virus propagates.  In this sample, one person spread the infected quote to 730 people, and those people spread the infection to their followers, and so on and so forth.  I hate to be the ant at the picnic, but never trust a quote that was forwarded to you from a friend on Facebook, Twitter, Pinterest, etc.  There is a good possibility it is contaminated.

Part I – The Entire Quote and Its Causes of Misattribution

The quote as a whole is mostly misattributed to John Keats, but it can also be found misattributed to Spencer W. Kimball, a Mormon leader.  Between the two, it is understandable how Kimball became involved with this quote, which I will explain.  However, how John Keats got connected with it is a conundrum. . . Well, maybe it isn’t.  I have a conjecture about this.  Note the similarity in the names John Keats and John Kennedy.  I suspect that a quote website administrator was copying quotes from an alphabetized list in which Keats occurred just prior to Kennedy, and when the list transitioned from Keats to Kennedy, the transcriptionist did not double check to ensure the quote entered corresponded with the correct person.  And from there, the quote virus took over and spread this misquote all over the universe.  This may sound far-fetched, but I have observed this alphabetical correlation with other misquotes.  I could definitely be off my rocker on this, but I have a feeling I’m not.

The second person associated with this quote is Spencer W. Kimball (1895-1985).  He was a leader of The Church of Jesus Christ of Latter-day Saints who made his “Education for Eternity” speech on September 12, 1967 to Brigham Young University faculty and staff.  In this speech, he correctly credits George Bernard Shaw for the line that begins, “see things and. . . say ‘Why’.”  But he incorrectly appends Kennedy’s line that begins, “We need people. . .”  He slightly paraphrases, but it is clear he used Kennedy’s speech as the source for this quote as he prefaces the quote as Kennedy did with the words, “summed up an approach to life.”  Here is the excerpt of Kimball’s speech found on the BYU Faculty Center website (fc.byu.edu):

Excerpt from Spencer W. Kimball’s Speech Showing How He Merged the Words of Kennedy and Shaw

Even though Kimball credits Shaw, albeit inaccurately, the quote continues to be misattributed to Kimball.  Additionally, this misquote can be found in other locations on the BYU website which means it will most likely continue to propagate.  But wait . . . the plot thickens.  Over the years, Kimball’s version of the merged Shaw/Kennedy quote has transformed into Kennedy’s original quote, so now Kimball is also credited with Kennedy’s exact words.  This misquote appears to be spreading throughout the Mormon community.  Not only is there a blog by a trio of Mormons that credits Kimball with John F. Kennedy’s exact words but there is a 2009 book about Mormonism with the same misattribution.  Who knew Kennedy could also morph into Kimball?  What a guy!  Let’s hope the quote virus doesn’t infect all the Latter-day Saints.

When Kennedy said, “We need men who can dream of things that never were, and ask why not,” he was referencing a line from a play by George Bernard Shaw.  The first line of the transcript image of John F. Kennedy’s speech above shows that he gives full credit to Shaw for saying other people “see things and . . . say ‘why?’ . . . But I dream things that never were—and I say:  ‘Why not?’”  This line is from part I, act I of Shaw’s play Back to Methuselah.  The first act takes place in the Garden of Eden where the Serpent says this line to Eve.  Here is the excerpt: 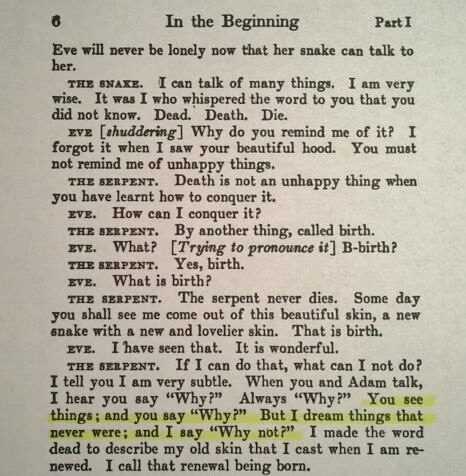 Excerpt from Part I, Act I of George Bernard Shaw’s Play, Back to Methuselah, Showing He is the Correct Author

Because the line “I dream things that never were; and I say ‘Why not?’” is used in John F. Kennedy’s speech, it is often misattributed to him even though he credits Shaw.

To make things even more confusing, Robert F. Kennedy also included the line in some of his speeches.  Even though he too credits Shaw, the quote is still commonly misattributed to Kennedy.  For example, here is an excerpt from his speech delivered at the University of Kansas, March 18, 1968:

This transcript is found on the John F. Kennedy Presidential Library and Museum website (jfklibrary.org).

I suspect the reason Robert F. Kennedy is more often misattributed to these words is partly due to Edward Kennedy’s eulogy delivered at Robert’s funeral.  In it Edward cites the line but does not credit Shaw which further reinforces the misconception that Robert was the originator.  Here is the excerpt of the eulogy delivered at St. Patrick’s Cathedral, New York City, June 8, 1968:

This transcript is found on the John F. Kennedy Presidential Library and Museum website (jfklibrary.org).

These final lines of the eulogy are correct in that Robert F. Kennedy did indeed say these words within a speech, but they are misleading as they don’t convey that he was quoting Shaw when he said them.

Because history has proven that it is the orator and not the writer who is celebrated for the memorable words that are born of brilliant oratory, I want to acknowledge Theodore “Ted” Sorensen.  He was John F. Kennedy’s primary speechwriter and played a key role in forming the Kennedy image and legacy.  Not only was he the man behind many of Kennedy’s most memorable lines, but he was an integral part of the administration serving as the president’s special counsel and adviser.

Once again, we have a serious case of the quote virus infection.  In this episode, the virus splits into different forms.  First John F. Kennedy morphs into John Keats and Spencer W. Kimball; then George Bernard Shaw morphs into Robert F. Kennedy and John F. Kennedy.  Sadly, there is no vaccine for this modern-day pestilence.  Only you, dear reader, can help stop the spread of this sickness.  Share the knowledge with your friends and family.  E-mail this post to them.  E-mail my website link to them.  Refer them to my “What You Can Do” page.  Practice safe quoting by only using verified quotes.  And finally, repeat my newest motto:

Leave a Comment. (Comments will not display until approved.) Cancel reply

This site uses Akismet to reduce spam. Learn how your comment data is processed.