Today’s post covers an inspirational quote that is falsely attributed to three different people.  Although it is not as widespread as most of the other misquotes I’ve written about, its mutations are worth mentioning.

The Misattributed and Misworded Quote and Its Variations

✘ “To know when to be generous and when firm—that is wisdom.”
Edith Wharton

✘ “To know when to be generous and when firm—this is wisdom.”
Edgar Watson Howe

✘ “To know when to be generous and when firm—this is wisdom.”
Edgar Watson

✓ “To know when to be generous, and when firm—this is wisdom.”
Elbert Hubbard
Little Journeys to the Homes of Eminent Orators
“Antony”

Here is the quote found in “Antony,” the second booklet in the Little Journeys to the Homes of Eminent Orators series first published in 1903: 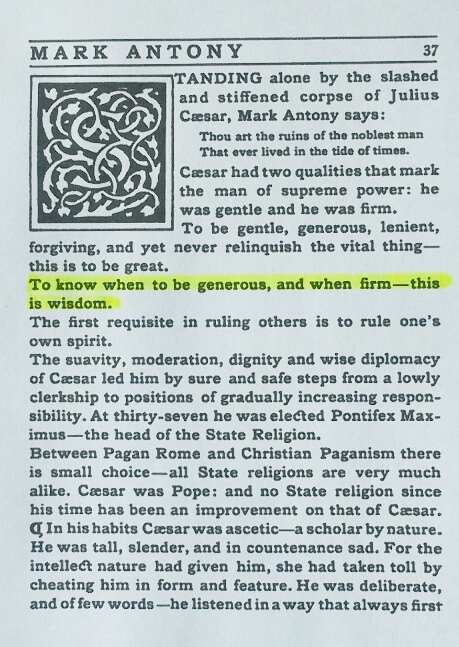 The Quote Found in “Antony,” the Second Booklet in the Little Journeys to the Homes of Eminent Orators Series

Little Journeys to the Homes of Eminent Orators is actually a subseries under the overarching series titled Little Journeys to the Homes of the Great which was published monthly from December 1894 to 1910.  There are a total of fifteen subseries each focused on a specific category such as artists, philosophers, and scientists.  Here is the complete list for the 1903 eminent orators subseries showing Mark Antony as the second subject:

“Antony” Found in the List of the 1903 Eminent Orators Subseries

Here is the title page for the “Antony” issue: 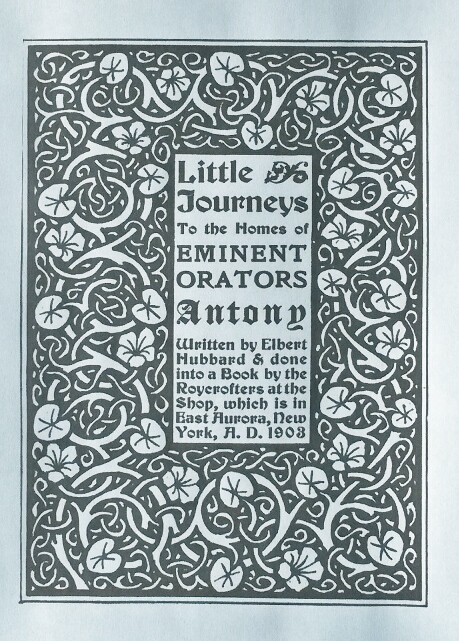 After surveying 40 infected websites, I found the following statistics.

As usual, the overwhelming majority of websites featuring the misquote are quotes-only websites.  I must reiterate:  never use a quote website as a source for quotes.  They are notoriously unreliable.

The Cause of the Miswording

Many quote websites contain the exact same quotes, misquotes, and typos in the exact same order found on other quote websites.  In other words, there is widespread duplication of error.  For example, notice today’s misquote has two versions of wording.  The Edith Wharton misquote ends with the words “that is wisdom” while the Edgar Watson Howe versions end with the correct words “this is wisdom.”  Obviously, the transcriptionist who entered the Edith Wharton misquote misread the ending and unknowingly created a new “standardized” version.  I could find no instances of the Edith Wharton misquote that end with the correct wording.  Similarly, I could find no instances of the Edgar Watson Howe versions that end with the incorrect wording.  Furthermore, notice the Edgar Watson typo that is also duplicated across websites.  Clearly, the transcriptionist inadvertently omitted Howe, and this version is now beginning to propagate across the internet.  It only takes one person to begin the proliferation of the exact same error across all quote websites.  The administrators simply copy content from each other without checking for accuracy.

The Cause of the Misattribution

The question is why are these three people involved with this misquote?  Why these three?  My answer is the letter “E.”  Notice that all three first names as well as the correct author, Elbert Hubbard, begin with the letter “E.”  This is complete conjecture on my part, but I have encountered this alphabetical pattern on quotes websites many times.  I suspect that a quote website administrator was copying quotes from an alphabetized list in which Edgar Watson Howe or Edith Wharton occurred just prior to Elbert Hubbard, and when the list transitioned from Edgar or Edith to Elbert, the transcriptionist did not double check to ensure the quote entered corresponded with the correct person.  My July 17, 2014 post titled “Kennedy Morphs into Keats:  Another Reason to Get Your Inspirational Quotes from a Reliable Source” also features this phenomenon.  In this instance, it involves the last names of Keats and Kennedy.

The second question is how did the unknown Edgar Watson get involved with this misquote?  Clearly, the most well-known of the three is Edith Wharton (1862–1937), the Pulitzer Prize-winning author of The Age of Innocence, Ethan Frome, and The House of Mirth.  Edgar Watson Howe (1853–1937) is not quite as renowned, but he did leave his mark as an American author as well as founder and editor of local newspapers and a magazine.  And then there’s the mysterious Edgar Watson.  The only Edgar Watson of note that I could find was Edgar J. Watson (1855–1910) of the Florida Everglades who was supposedly responsible for several murders.  Based on this information and the fact that he only received four misattributions, I am going to assume this “person” is the result of a typo.  Somewhere along the line, a quote website administrator inadvertently omitted “Howe” while entering data on a website and consequently created a new “person” in the world of quotes.  This is speculation on my part, but I have a feeling I’m right.  One thing we do know is that the quote virus will be infecting other websites with this misquote in the near future, and Edgar Watson will become a real person.

I came across a quotes paraphernalia website featuring today’s misquote attributed to Edgar Watson—not Edgar Watson Howe or Edith Wharton or Elbert Hubbard—but Edgar Watson ONLY.  For $14.99 you can have your own misquote coffee mug.  For $29.99 you can get a misquote smart phone case (actually dumb phone case is a better description).  If you really want to splurge, you can have your own misquote framed art print for $39.99.  I wonder what the people at this company would think if they knew Edgar Watson was a serial killer.  Oh come on.  You’ve got to admit; that is amusing.

Once again, we have seen the damage the quote virus can inflict.  To avoid being infected, be sure to practice safe quoting.  Never trust a quote that does not have complete source information.  The author/orator’s name should be accompanied by the work in which the quote is found along with applicable information such as chapter, verse, stanza, line, scene, act, etc.  Never trust a quote posted on social media, including the ones with the title, “Yes!  He actually said this.”  Don’t believe it.

Finally, the best way to kill the virus is through education.  Please help spread the knowledge by forwarding this article to friends and family.  Additionally, authors and speakers often use quotes in their work and unknowingly are the cause of misquote propagation.  If you happen to know any, please share the knowledge with them.

Until next time, don’t forget to